I am a Senior Engineer for the Highway Improvements Team for Enfield Council and last year was given the objective of looking at alternative materials and processes as part of my yearly appraisal. One of the areas I chose was speed cushions as we had some 20 mph zones to build and I also knew that several more were in the pipeline. The construction we used at the time was the traditional bitumen construction of a 75mm high cushion, 2.5m long and 1.7m wide. These were quite time consuming to construct with a gang of three men able to construct approximately 4-6 per day depending on the location. The main problem with this type of construction is the use of temporary traffic signals and the delay to vehicular traffic. I looked at several alternatives and these included precast concrete and bolt down rubber cushions.

Precast concrete offered durability against bitumen, which often deteriorates on the edges of the cushions, but offered no saving on time. Upon investigation of the installation methods, it appeared that construction could actually take longer on a live carriageway. The precast units have to be laid on a 150mm bed of wet C40 concrete that must have at least 24 hours curing time before it can be opened to traffic. What with the reinstatement of the wearing course, the whole operation will take between 27-28 hours to complete one cushion.

Enfield does have some of these concrete cushions in the borough but they were installed by a developer on a new housing estate road during its construction and as such were not hampered by vehicular traffic during their construction.

They have been in place now for ten years and show no signs of
deterioration. Bolt down rubber cushions on the other hand can be installed at less than one per hour, with a gang of three installing approximately 9 per day.

The cushions come in 8 separate rubber profile pieces and two metal angle iron lengths. Firstly the metal lengths are bolted down and the rubber sections are then laid over the top. These sections are also individually bolted down, with all raw plugs being fixed with an epoxy resin. This provides a strong and interlocking structure with the metal lengths adding security against any slip caused by hard breaking of vehicles on top of the cushions.

Care does need to be taken when choosing the site and areas of rutting and crazing should be avoided. They both have a standard profile that does not deteriorate, whereas bitumen is prone to potholes on the sides. Size and height can also vary during construction with bitumen. The main advantages of using rubber is that they are made of recycled truck tyres and are therefore a sustainable material, they are light and easy to handle and most importantly very quick to install. The other advantage is that if the road needs to be resurfaced at any point in the future, the cushions can be taken up and replaced when the work is complete.

Mick Pond, London Borough of Enfield More recently Enfield Council have been using a speed cushion with a white marking around the cushion, should the cushion be removed then there is no reinstatement needed, which saves maintenance costs.

Take a look at our  Traficop Speed Cushions. 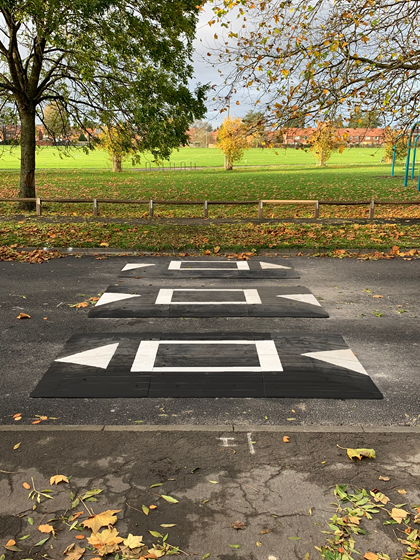 Traficop Speed Cushions offer the ultimate in design versatility with its preformed construction providing consistent profiles and dimensions, available in both 65mm and 75mm heights